DPP is an advanced tool for the regression of experimental data, developed and maintained by DECHEMA. It allows the user to convert raw experimental data (discrete measured data) to the data required by models used in simulation.

ProSim has a partnership agreement with the DECHEMA for the distribution of DPP. For additional information on DPP, do not hesitate to contact us. 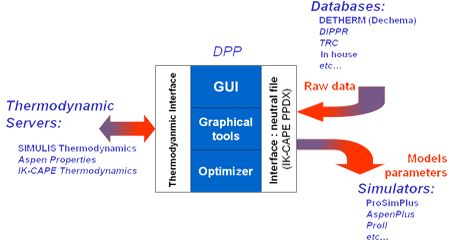 Calculations of parameters that simulator models use are executed from external sources data. Acquisition of these data is made through a neutral file interface.

In addition to the selection and the graphical visualization of experimental data sets, DPP allows the user to regress models parameters. Calculations are ran with the optimizer of DPP and exported in order to be used in external simulators (ProSimPlus, AspenPlus, ProII…).

The power of DPP’s optimizer allows the user to regress different type of data simultaneously (VLE + LLE + HE + Azeotropes for example) with to possibly weighting certain data and using several error functions.
A large choice of optimization algorithms (Simplex Nelder-Mead), Powel, Fletcher-Reeves, Broyden-Flechter-Goldfarb-Shanno, Gauss-Newton modified) enables an accurate adaptation of the system to the problem to be resolved.

The user will find his workflow significantly improved.

With “traditional” thermodynamic packages, the user first needs to select the components and the models, save the problem in a specific file, import the problem in Data Preparation Package to run optimization and regression and then export the results in another file which format depends on the simulator used in exploitation of results.

As Simulis Thermodynamics is embedded, he now remains within the DPP environment from the selection of the components to the complete identification of the model. From the results provided by Data Preparation Package, the engineer can create CAPE-OPEN “Property Packages” that includes all thermodynamic elements required (pure components properties, models, interaction coefficients…). 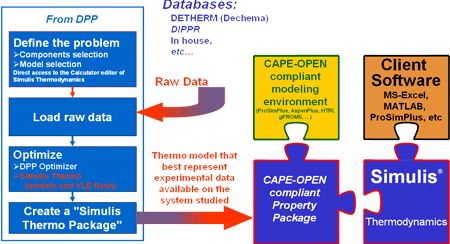 These Property Packages can be used in any third party CAPE-OPEN compliant modeling environment such as AspenPlus, HTRI, gPROMS for further calculations. They can also be used through Simulis Thermodynamics in MS Excel, MATLAB or any software which does not include rigorous thermodynamic calculation routines. Even though engineers work on different modeling tools, the Property package ensures that they use consistent data.
View All software
ProSim, Software & Services in Process Simulation

You also have the option of disabling these cookies, but disabling some of these cookies may affect your browsing experience.
Necessary Always Enabled

Performance cookies are used to understand and analyze the key performance indexes of the website which helps in delivering a better user experience for the visitors.

Analytical cookies are used to understand how visitors interact with the website. These cookies help provide information on metrics the number of visitors, bounce rate, traffic source, etc.

Advertising cookies are used to provide visitors with relevant advertising and marketing campaigns. These cookies track visitors through websites and collect information to deliver personalized advertisements. No such cookie is present on our site.

Other uncategorized cookies are those that are being analyzed and have not been classified into a category as yet.